CDC: 53 million adults in the US live with a disability 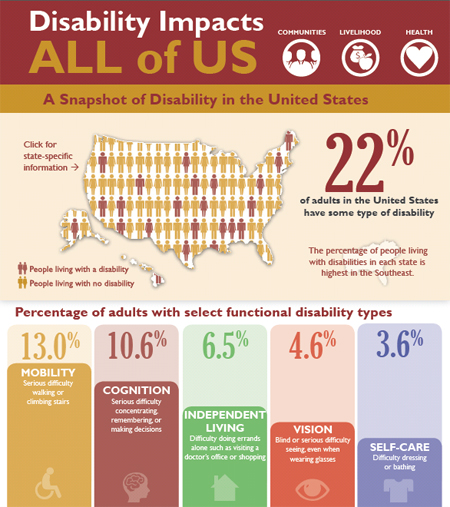 In the United States, one out of every five adults has a disability, according to a new study published by the Centers for Disease Control and Prevention. The most common functional disability type was a mobility limitation – defined as serious difficulty walking or climbing stairs — reported by one in eight adults, followed by disability in thinking and/or memory, independent living, vision, and self-care.

The researchers found that the highest percentages of people with disabilities are generally in Southern states, for example Alabama (31.5 percent), Mississippi (31.4 percent), and Tennessee (31.4 percent). The report did not determine why differences occur by state; however, states in the South tend to have some of the higher rates of chronic diseases, such as heart disease and diabetes, which may also be associated with disability.

“We are all at risk of having a disability at some point in our lifetime,” said CDC Director Tom Frieden, M.D., M.P.H. “Health professionals and health care systems need to meet the needs of this growing population.”

“For the past 25 years, the Americans with Disabilities Act (ADA) has made a positive difference in the lives of those who have disabilities by ensuring better access to buildings, transportation, and employment. Access to preventive health care is also critically important for those with disabilities,” said Georgina Peacock, M.D., M.P.H., Director of CDC’s Division of Human Development and Disability. “Many of the health issues that people with disabilities face may be addressed by making sure they have access to health promotion programs and health care services, including preventive health screenings, throughout their lifespan.”

Although disability information has been collected in national surveys for many years, this was the first time that functional disability type was included in the Behavioral Risk Factor Surveillance System (BRFSS). The BRFSS is an annual, state-based telephone survey conducted by states in collaboration with CDC that gathers information on demographics, health status, health behaviors and disabilities.